AGROPIENSO - DESIGN AND CONSTRUCTION OF A COMPLETE BAGGING LINE FOR FEEDSTUFFS

Agropienso, a Spanish cooperative feed manufacturer, has modernised its end-of-line with a bagging machine, a palletiser and a stretch wrapper from TMI. The mutual trust between the two companies has been the key to the success of this project. José Enrique Calderón, Head of Agropienso's factories, tells us about his experience: 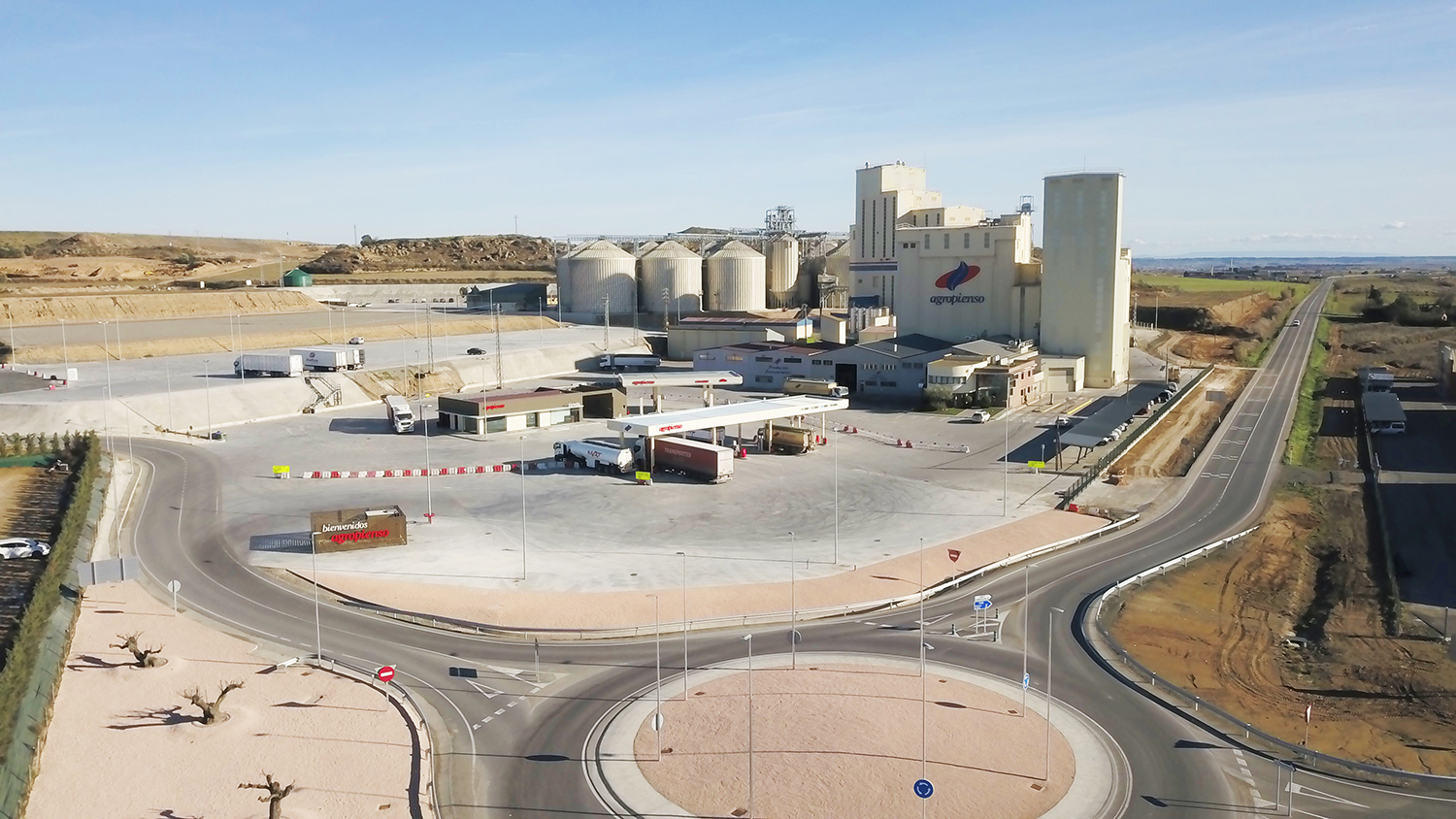 Agropienso is a cooperative founded in 1979, whose more than 40 years of history with a constant evolution in infrastructures and investment in R&D, has made it one of the main producers of compound feed, both in Aragon and at a national level.

Among its greatest achievements are ensuring the profitability of farms, food safety, respect for the environment and animal welfare and health, with a positive and direct impact on the agricultural economy of the surrounding area.

The company aims to meet the needs of both large and small farmers, and this largely involves diversifying its activities. For this reason, Agropienso also has a petrol station, cereal drying and storage facilities, an insemination centre, etc., which provide a service to many livestock farmers in the area.

José Enrique Calderón, Head of Agropienso's factories, explains: "We offer the same product as many other feed producers, but we go further thanks to our cooperative mentality. For the farmer, coming here is like going to the supermarket, we have: a medicine shop, hardware store, phytosanitary products, products for the fields, our petrol station... we have a lot more things around us and people take advantage of this.  This differentiates us from other feed producers and that is why the farmers in the surrounding area trust Agropienso".

Although it is true that the automation of livestock farming, with increasingly larger installations, has increased the demand for bulk at the expense of bagged products, small farmers continue to use the bag format, which is more suitable for small-scale consumption. Agropienso wants to continue looking after all these farmers around them who have always trusted the company, offering its products in this format as well.

On the other hand, Agropienso also dedicates part of its activity to packaging services, offering them to other feed producers who do not own bagging machinery. Therefore, the company needed modern machinery that would allow them not only to bag their own products, but also to be prepared to provide a packaging service to any producer who might require it.

Agropienso already owned two bagging lines (the first one equipped with a TMI palletiser and the second one completely manufactured by TMI).

The need to modernise the first line had long been considered, given the disadvantages a bagging line presents after 30 years of use: weighing was carried out using weights, the components were already obsolete and it was difficult to find spare parts, almost more time was spent on small repairs than on the actual use of the machine, etc....

In addition, the existing line consisted of a bagging and palletising machine, with a semi-automatic turntable stretch wrapper. This had initially been installed to be used occasionally for the storage of pallets outside. However, in practice, it came to be used on a regular basis, because the handling of unwrapped pallets often resulted in broken bags. Therefore, it became clear that it was necessary to integrate an automatic stretch wrapper into the new line.

So Agropienso contacted directly TMI for advice on the possibilities of modernising this line.

Not only did Agropienso own a complete TMI bagging line, but it had also worked very closely with its engineering and technical team in changing an existing bagging machine's dosage from gross to net weight. This long-term relationship had generated "a good experience track record with TMI".

Another decisive factor in the choice of supplier was proximity. As we have already mentioned, one of Agropienso's missions is to bring life to the region around it, opting mainly for local companies as suppliers. Not to mention that proximity speeds up all maintenance, interventions, and communication in general.

THE SOLUTION FROM TMI

After a thorough analysis of the project and Agropienso's needs, TMI proposed a complete line consisting of:

In the case of Agropienso, ILERSAC A has been equipped with a net weight dosing unit by conveyor belt model ILERPES NT, hence the full name of the bagging machine: ILERSAC ANT. This bagging machine reaches 700 bags/hour when combined with this weighing and dosing module.  It therefore optimises production at the bagging point, while always maintaining a constant production rate.

ILERPAL R has a layer forming system using a gripper that allows the overlapping of open-mouth bags. It is also highly versatile, simplifying format changes in a range from 5 to 50kg.

In the case of Agropienso, it helps to ensure that the loads are kept intact during handling in the plant, providing great savings in safety and labour costs (compared to the semi-automatic system previously available).

This line has recently been installed at the Agropienso plant in Esplús, Huesca, Spain.

José Enrique explains that, although not everything in the garden is rosy and there have been moments of "pressure trying to start using the machines as soon as possible", cooperation and perseverance have been the key to the success of this project, given that "good results have been obtained when working in partnership with TMI".

"After many years without undertaking a new installation, when you actually do it, you find out a lot of surprising things; a lot of improvements that ultimately you realise you would like to apply to the old [machines]. TMI has learnt a lot and has incorporated them into its new machines. TMI has acquired knowledge from the installations it has made, and you can see an evolution". - explains José Enrique, who sees an improvement in this line, not only in the bagging process but also in the entire plant environment and in the day-to-day life of the workers: "The cost of the machine is not only what you can recover, but also all the safety and labour costs that a manual system entails and which are saved thanks to a line with these kind".

The agri-food sector is very changeable and the future is always full of surprises. In the case of Agropienso, having an end of line with these capacities means being prepared for whatever may come - both in terms of their own production and the outsourcing services they offer.

"You never know when someone is going to come along asking you to make 40,000 bags every day. Now we are prepared. Before, we weren't. We have been offering packaging services for many years using the old line and now we have increased this capacity".

Thus, this new installation provides Agropienso with a greater entity in the sector and establishes it as a reference company for those producers in the area who need packaging services.

Trust and partnership have been the key to the success of this project. Among others, because offering professional service and attention, collaborating with customers in the development of their business and the desire to exceed their expectations are key links in TMI's chain of values.

Do you want to know how you can improve the productivity of your production line with TMI? Contact us through this form and get customised advice.

6 WAYS TO REDUCE DOWNTIME IN YOUR END-OF-LINE

Downtime is a fundamental KPI for measuring the performance of a line. We take a look at what causes it and how it can be reduced.